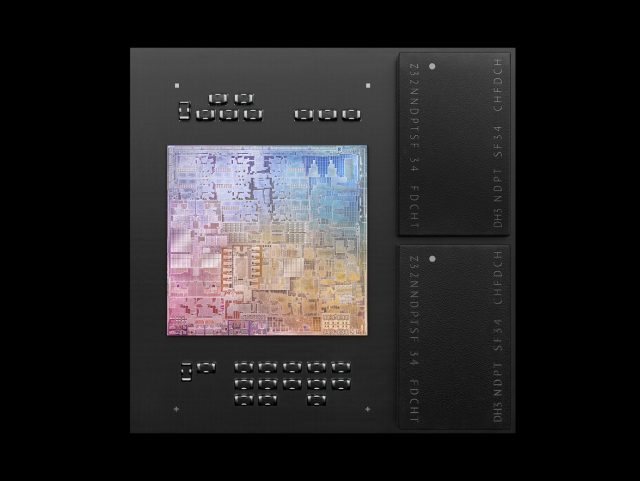 Update: With the publication of the first M1 reviews, the CB23 scores published by Bits and Chips are clearly far too low. The entire article below is based on data that turned out not to be true according to performance data run by publications with shipping hardware. While the analysis below would be fine if the M1 performance values were accurate, today’s reviews show much stronger performance for the M1 than the CB23 results below anticipate.

We’ll have an analysis of those numbers up shortly. Original story — now thoroughly outdated — continues below.

Last week, Apple’s M1 SoC announcement and some initial benchmark data painted a picture of a formidable ARM-based laptop core that could challenge the best AMD and Intel have to offer. Now, new data from two additional benchmarks suggests a more nuanced picture — though not necessarily a very friendly one for AMD or Intel. We’ll start with Cinebench R23, the latest in a long line of rendering tests built by Maxon to highlight the performance of its Cinema 4D software.

(P.S. Yep, great IPC, but not so great clock: you can’t have both so easily)

The Ryzen 5 3600X is a very poor point of comparison for the M1, but I’ve got access to a Ryzen 4800U, and I ran Cinebench R23 for this article. The Ryzen 7 4800U scored 7301 in multi-threaded and 1139 in single-threaded, for a total multi-threaded ratio of 6.41x. This weakens AMD’s position in this comparison and highlights the importance of testing in as similar a TDP bracket as possible. The 4800HS is 1.08x faster in ST and 1.45x faster in MT. Having an extra 25-35W of power to work with changes the performance equation. We’ll be comparing against the 4800U, not the 4800HS below.

A few caveats: We are comparing the performance of a possibly fanless system intended to run in 5-10W envelopes against systems equipped with fans that are often allowed to peak outside 15W for short intervals as part of turbo behavior. We don’t know if the M1 being tested comes from the Mac Mini or from the MacBook Air — the M1 inside the Mini and the MacBook Pro is actively cooled, while the MacBook Air is not. If either chip has an advantage here, it’s going to be AMD. While we can discuss the TDP ranges of the products as defined by Apple, TDP is not identical to power consumption and cannot be treated as equivalent to it. All power calculations derived from TDP are back-of-the-envelope approximates.

In single-threaded performance, AMD is 1.15x faster when operating in a power envelope that is nominally 1.5x larger. If we assume that Apple’s M1 runs at a constant speed of 3.2GHz (unlikely, but we’ll assume it for these purposes), it means AMD is winning this comparison thanks to higher clocks, not higher baseline efficiency. AMD has a 1.27x clock advantage, but only a 1.15x performance advantage. This is, of course, still an AMD win on raw performance, but it may very well be an Apple win in terms of performance per watt. It’s also evidence that Apple is capable of building a CPU that competes with AMD and Intel overall. Apple’s M1 scores may not be faster than 98 percent of laptops, but they definitely fall within the range of competitive results in products AMD and Intel currently sell.

AMD pulls ahead decisively in multi-threaded mode. This is expected — Apple has a 4 4 CPU configuration, while AMD is using a full eight CPU cores. Apple’s scaling factor is 4.57, implying the SoC picks up ~1 Firestorm core worth of performance from its IceStorm cluster, while AMD is clearly power limited in terms of improvement. We don’t know how much performance scaling Apple should be picking up off a 4 4 core configuration — the M1 is just too new — so we can’t say much about that situation at the moment.

What does this tell us overall? A few things. First, we know that rendering is a strong workload for Ryzen, which means this comparison is pretty friendly for AMD. Second, we know that the M1 is almost certainly operating in a lower power envelope than even the 4800U, which makes any attempt to estimate absolute performance tricky. Third, we know that Apple’s M1 scores, if accurate, put the CPU in contention with other mainstream chips currently sold by Intel and AMD. Sure, we’re probably talking about something more along the lines of a Ryzen 5 or a Core i5, but that’s still better competitive positioning than any non-x86 architecture has been able to take relative to an x86 architecture in 15-20 years. Given that this is literally the company’s first chip, hitting even the midrange of the competition in a lower power envelope is a serious achievement.

Given that our previous impression of the M1’s performance was based on a synthetic benchmark with an unknown ability to correctly predict real-world performance, it’s scarcely surprising that our new data point lands in a somewhat different place than our first. Cinebench R23 indicates the M1 is a highly efficient processor with good IPC that loses to AMD on the basis of clock rate. Multi-threaded performance uplift suggests further good results from a larger number of FireStorm cores.

The gap between the M1 at an assumed 10W TDP and the 4800U at 15W suggests that the M1 would be victorious if AMD pulled down into the 10W envelope. This is not surprising. CPU power curves are not linear — they tend to flatten at the bottom, meaning it takes significant reductions in clock and voltage to squeeze out nominal improvements to power consumption. Most of Apple’s eye-opening performance claims are based around 10W TDPs because x86 CPUs give up a lot of performance to run inside that power envelope.

The Affinity Photo benchmark, however, shows something rather different. The benchmark measures rasterization and vector performance, and the M1 decisively beats a six-core Intel-equipped iMac. Again, this is a benchmark designed to test a specific application, like CB23 is intended as a benchmark for Maxon’s Cinema4D. Here’s the M1:

Apple M1 chip benchmark vs. 6-core 3.7ghz 2019 iMac with AMD 580X in @affinitybyserif Photo – if I hadn’t measured the CPU number myself I wouldn’t believe it 😂A monster.. #apple #benchmark #affinityphoto pic.twitter.com/Vi75woBOXl

These results tip back towards Apple’s M1. A quad-core 4 4 CPU outperforms a six-core chip with a relatively high boost clock. We obviously have no AMD results for this benchmark, but again, the M1 comes off very strongly here, at an average of 1.25x faster than the Intel chip. That’s the kind of gap you could theoretically close on the x86 side of things by boosting clocks up to around 5GHz and adding cores, of course, but it speaks to a high overall baseline for Apple’s M1.

ExtremeTech’s assumption, until we have proof otherwise, is that the best predictor of M1 performance is to look at the Intel CPUs Apple is still selling. The fact that the company is still fielding six-core Intel CPUs with Radeon Pro 5300M GPUs suggests that Apple believes its own CPU cutoff ought to be here.

The implications of these figures are somewhat better for x86 than the more lopsided GeekBench 5 results, and since CB23 is nearer to a real-world application than GB5, that’s a good thing for AMD and Intel. That said, there’s still a real threat here. The gap between AMD and Apple in single-threaded performance is smaller than the improvements AMD saw when moving from Zen 2 to Zen 3. Zen 3’s higher per-thread performance will give AMD some margin in absolute terms, just as Tiger Lake gives Intel some of its own — but not a lot of it, in either case. These CB23 numbers still show an Apple CPU that can compete with modern x86 chips, particularly in its power envelope. The Affinity Photo numbers, on the other hand, look pretty good for Apple.

The problem for AMD and Intel isn’t the M1 — it’s what the M1 represents, and what Apple might deliver in the next 18 – 36 months if it improves its own chips faster than the x86 manufacturers improve theirs. Apple’s transition schedule implies we’ll see desktops next year, with those chips likely going head to head with either Zen 3 or Zen 4 on AMD’s side of things, and up against Rocket Lake on Intel’s. In laptops, it’ll be Zen 3 (most likely) versus Tiger Lake versus M1 itself. It is unclear if Apple will launch both a desktop chip and a higher-end laptop CPU next year, or if the company will delay transitioning some models over to ARM until 2023.

After some early results predicting very strong wins for Apple, Cinebench R23 gives AMD a modest single-threaded win. Zen 3 mobile CPUs would further improve on these results. Apple, we can assume, will have an “M2” available next year, so we’ll see more examples of how these platforms compare across a range of configurations, core counts, and TDPs. If Intel recovers its mojo and AMD continues executing well, both companies may fend off any significant change in the PC market. If they don’t, other ARM vendors will inevitably try to steal a page from Apple’s book and enter the PC market with hardware of their own. x86’s price premiums are predicated on the assumption that it’s the fastest consumer architecture anyone can practically buy. The M1 itself is not necessarily a threat to that positioning, but its descendants very well could be. If the Affinity Photo benchmark proves more accurate, Intel and AMD might be in more serious trouble.

Keep in mind, as always, that we now have a whopping four benchmark results (SPEC on A14, GeekBench 5, Cinebench R23, Affinity Photo), all of which are synthetic to one degree or another. The M1 versus x86 performance question is not settled. It won’t be settled until we have shipping hardware on final release software. Today, the results look a bit better for x86 at the highest-end of the product stack, and the balance between them is a bit more in-line with what I’d expect. We’ll see if that holds true.