System requirements are always changing, with what was once the recommended amount of RAM to play a game slowly but surely becoming the minimum. And that’s to say nothing of more demanding tasks, like photo and video editing or, well, Chrome tabs. A lack of RAM could be the source of any performance bottleneck you may have, as your gaming PC or laptop struggles to juggle applications on your subpar memory capacity.

While it’s not as exciting as picking the best graphics card or best gaming CPU, making sure you have sufficient system memory is essential for putting together the best gaming PC build. And with AMD and Intel’s latest processors supporting even higher memory frequencies, you’ll need to pick out your RAM carefully if you’re building a brand new rig, as RAM with higher frequency could boost fps in some games.

We’ve put together a list of our favourite RAM modules for both AMD and Intel platforms, factoring in budget and use. And if you want RGB invading yet another corner of your gaming world, we’ve got you covered.

While not the most powerful RAM modules in the world, these sticks from Corsair are one of the most popular in PC builds, and it’s not hard to see why, combining a pretty high frequency and a sleek looking black heatsink with good value. Unlike some other RAM modules with heatsinks, it keeps a low profile ensuring it stays compatible with the best CPU coolers no matter how much they spill over.

We’d go for the 16GB pack consisting of two 8GB sticks at 3600MHz memory speed, which can easily be configured on the best gaming motherboards from Intel with its XMP technology. You’ll be able to reach 3600MHz on all the latest AMD boards too, but Intel makes it that little bit easier to configure your RAM out of the box to run at its rated speed. And, if you ever need to go up to 32GB in the future, you’ve got two DIMM slots spare. 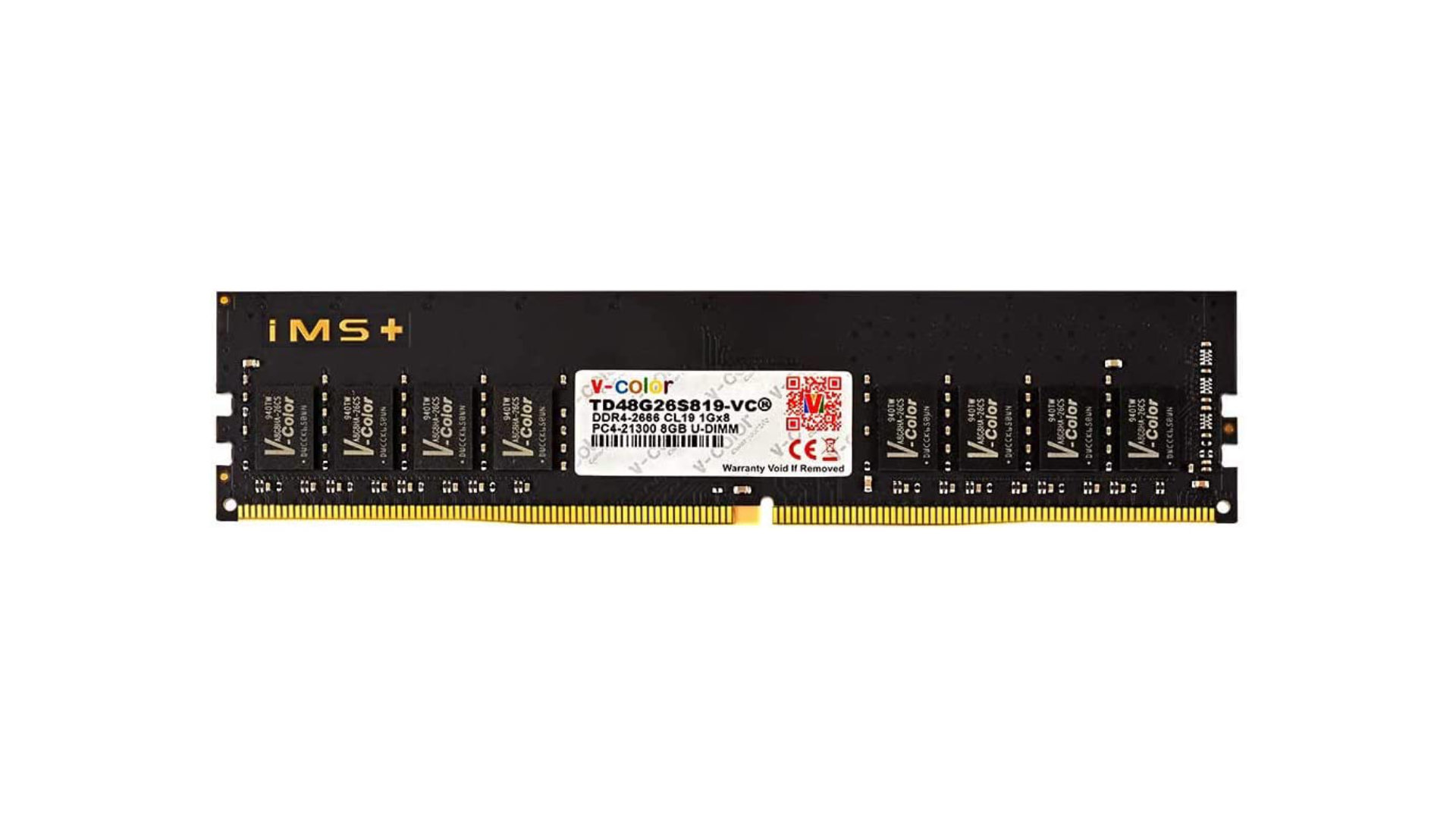 You might not have heard of v-Color compared to the big RAM players like Crucial, Corsair, and HyperX, but it’s still a great option if you want to build the best cheap gaming PC. We wouldn’t normally recommend 8GB on its own unless you’re going to be exclusively gaming, as productivity tasks will likely push you straight over that 8GB barrier. The 2666MHz clock speed is lower than the other modules in this list, but we can’t complain at this price.

Plus, if 8GB doesn’t turn out to be enough, you can always purchase a second 8GB stick further down the line and enjoy the benefits of increased transfer speed from dual-channel memory.

While the fastest DDR4 RAM comes courtesy of Corsair at 5000MHz, it’s overkill when you consider a price tag around $1000 / £1000. This configuration of Corsair’s Vengeance RGB Pro sticks is the best for a high-end gaming PC build. Four 8GB sticks in a quad-channel configuration doubles the bandwidth over dual-channel, and while that benefit may not be noticeable in the real world, it still gives you the bragging rights of four flashing sticks of RGB goodness.

The 3600MHz clock speed is easily achievable on AMD’s latest Ryzen processors, and should be easy to reach on Intel chips too thanks to XMP 2.0 support. 32GB is more than you should need right now, and will ‘future proof’ your PC when it comes to the RAM department. 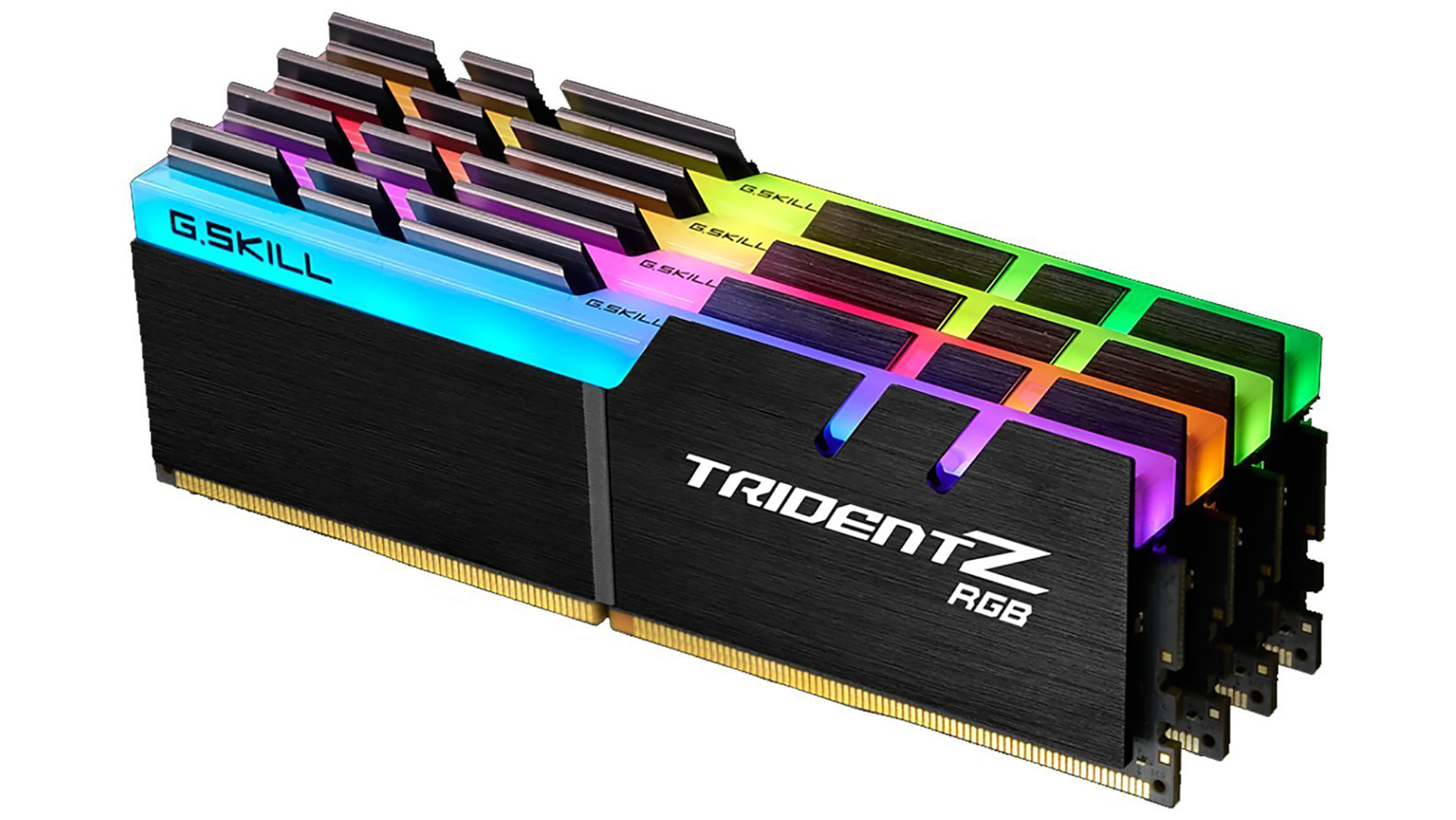 Here, you’re getting a high 3600MHz clock speed across two 8GB sticks, but it’s the addition of a fully customisable, multi-zone RGB light bar along the top of each module that truly makes this bundle stand out, adding a little style and colour to your system.

It only costs a little more than similar-performing non-RGB RAM on this list, so if you’re looking for that extra flair inside your windowed PC case, it may be worth considering. Plus, with XMP support, it’s easy to get your Intel motherboard running the RAM at its rated 3600MHz speed. 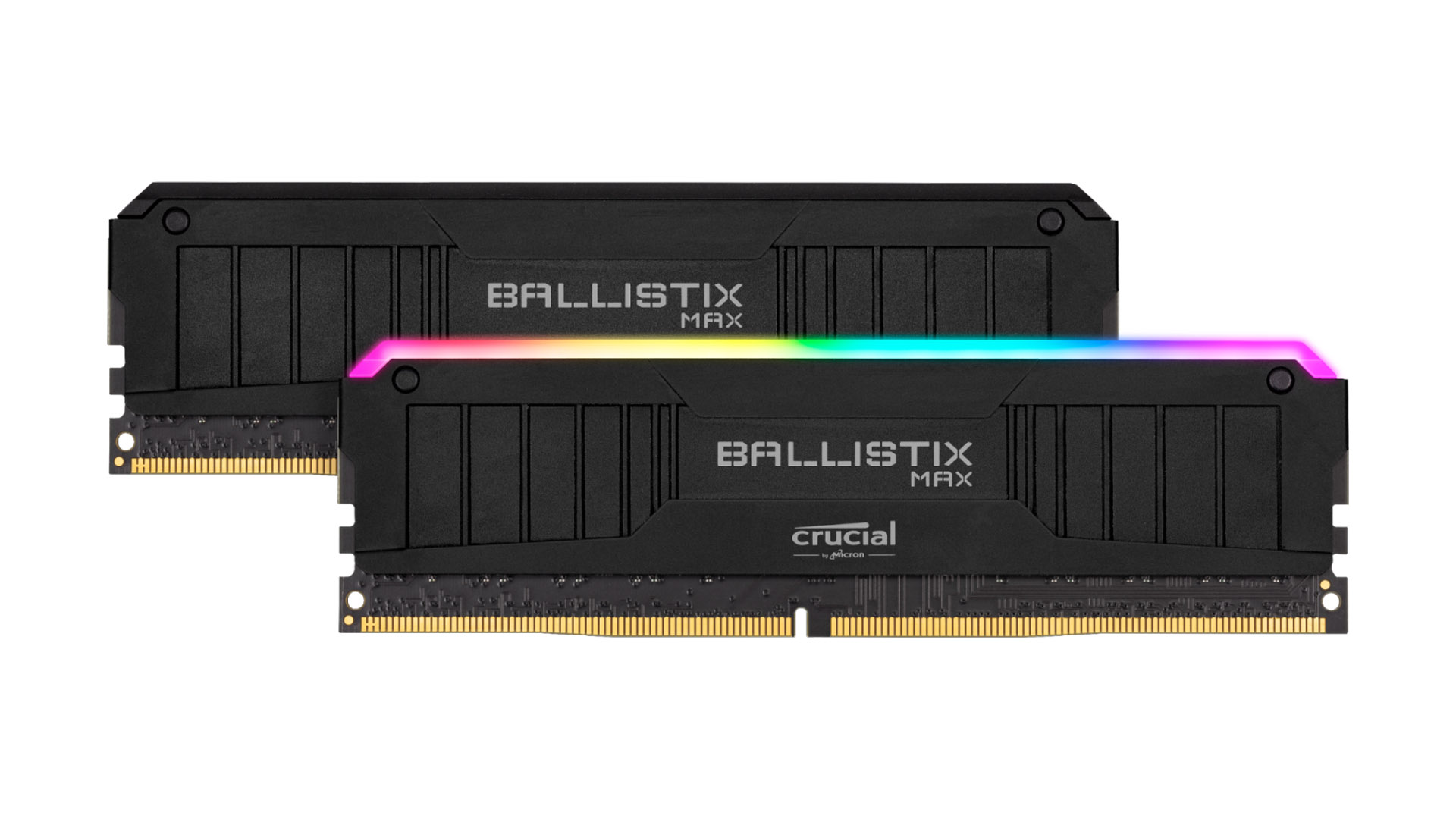 AMD’s 5000 series processors are able to take great advantage of high clocked memory, which is why we’d recommend this 4,000 MHz set from Crucial if you’re running the latest Zen 3 CPU and motherboard, giving you some of the fastest RAM you can get your hands on.

As a bonus, it’s got RGB strips built in too which can sync with lighting software from multiple motherboard manufacturers such as Asus, MSI, and Gigabyte. 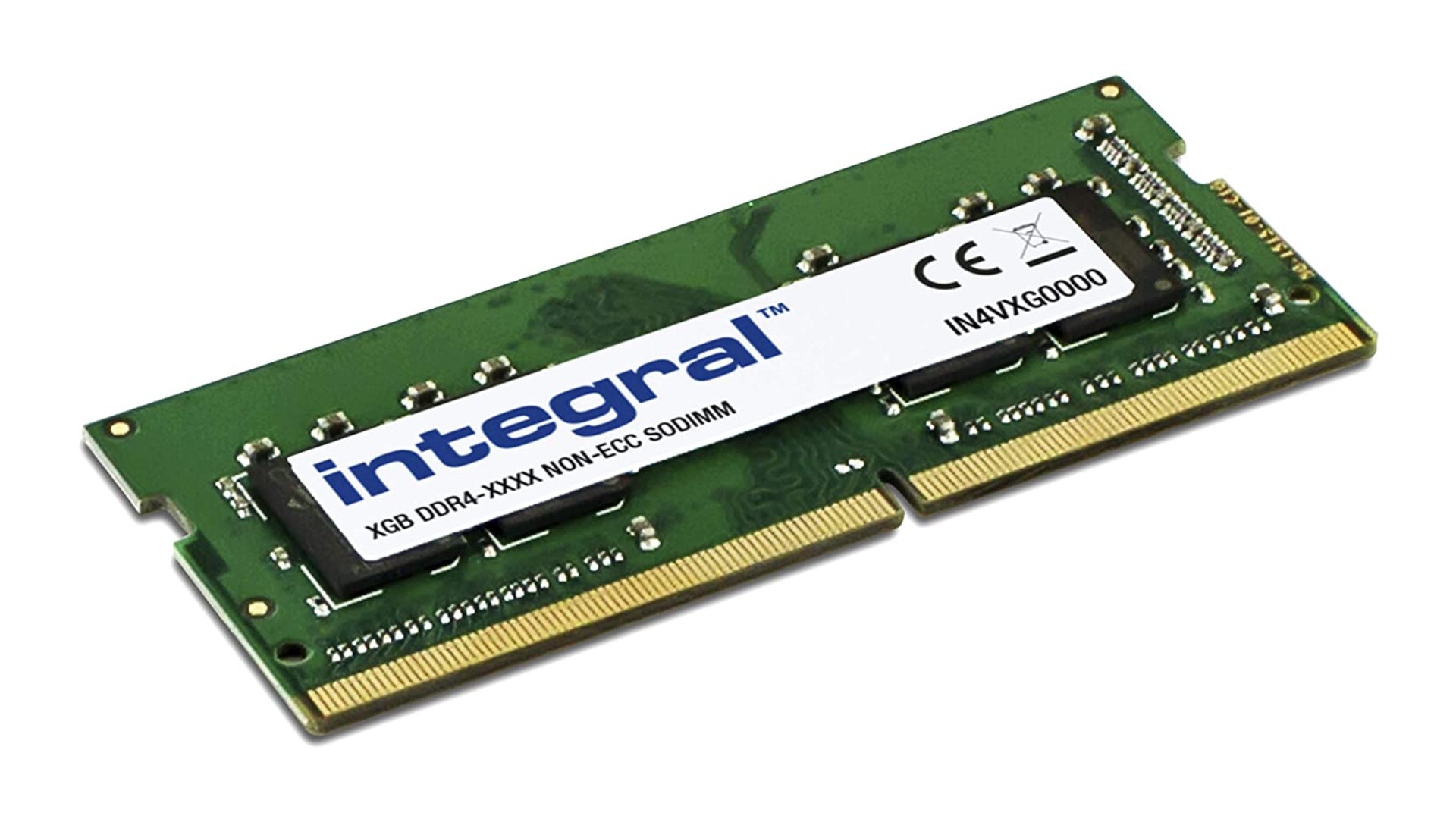 Nowadays, many of the best gaming laptops make it easy to upgrade RAM, giving you a quick and easy performance boost if it begins to show its age. If you’ve got an older laptop that’s in desperate need of more capacity or you’re looking to add a second stick in something newer, then this 8GB SODIMM stick from Integral suits both scenarios, with a 2666MHz clock speed.

Obviously there’s no need to look for RGB lighting or style when it comes to laptop RAM – you’re not going to see it. But do make sure your laptop actually supports RAM upgrades before taking the leap, as some have memory soldered to the board.

There are only a few bits of technical jargon you’ll need to understand when it comes to buying RAM. The higher the frequency speed (MHz) of the RAM, the faster the CPU can access data stored in the memory, helping to improve system performance. With lower voltage, the RAM modules produce less heat, which can help you avoid thermal throttling.

The current mainstream DDR4 generation has a significant voltage decrease from DDR3, resulting in greater system stability, so if you still haven’t upgraded, we’d urge you to. If you’re building a new PC, this is unlikely something you’ll need to worry about as DDR3 started to get phased out when DDR4 became more widespread in 2016.

With DDR5 RAM on the horizon, the next generation of RAM will bring even higher frequencies and lower voltages, further improving system stability and performance. You could try holding out with your current motherboard for several more months before overhauling your PC and have those fancy new DDR5 sticks inside, but we imagine the costs won’t be cheap during the first wave.