Whether you’re wanting to tear through the underbrush in the latest Colin McRae racing game, stroll through the forestry in your favourite RPG, soar above your local city in Microsoft’s flight simulator, or anything else in between, owning one of the best PC controllers is the way to ensure the perfect gaming experience. From flight control replicas to your basic analogue joystick controllers, the best gamepads for PC have a lot to offer across many game genres.

Yes, whether it’s a great wired or wireless pad, an official or third-party device, having a well-built, comfortable controller can really make the difference to your game. So it’s important you make the right choice.

We’ve checked out the official Microsoft Xbox One and Elite pads, as well as the excellent Sony DualShock controller. But the likes of Scuf and Razer are all making decent alternatives if you’re looking for a funky design or just want a host of different buttons at your thumbs’ disposal. But the biggest gamepad decision is about whether you favour the Xbox’s offset thumbstick design or the symmetrical PlayStation layout. For our money, the offset design gives you the best balance between control and easy access to the buttons, making the Xbox controller the best PC gamepad you can buy.

There are specific controllers for other game genres too. A flight or space-based sim really demands a quality flightstick, especially one with a separate throttle for those dogfights. And if you’re a dedicated racer then a steering wheel, with good force-feedback, can shave valuable seconds off your in-game lap times. And may even save your life… No, really.

Here are the best PC controllers: 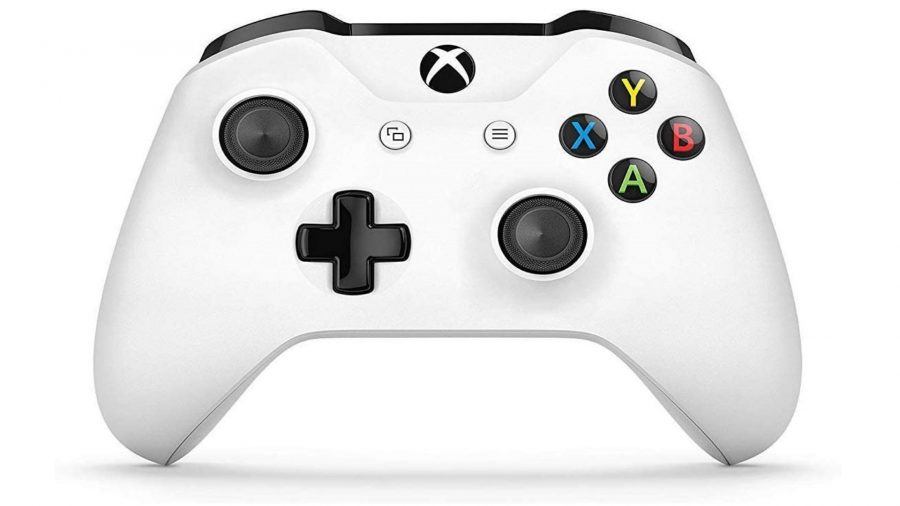 The best PC controller is the Microsoft Xbox One Wireless.

The latest wireless Xbox One pad is sublime. For our money it’s the best game controller for PC you can buy right now. There may be a growing rank of PC gamers lining up behind Sony’s DualShock 4 as the go-to gamepad, but the ever-so-slightly redesigned Xbox One pad’s got it all.

The overall layout has barely changed from the very first Xbox One controllers, but considering how well conceived and solidly-built they were that’s no bad thing. The balance of the pad is excellent and its curved grip is comfortable and well machined. The Xbox One wireless controller is a beautifully, ergonomically designed piece of peripheral hardware and it’s tough to see how it’s going to be bettered. For now, it’s absolutely the best gamepad for PC out there. 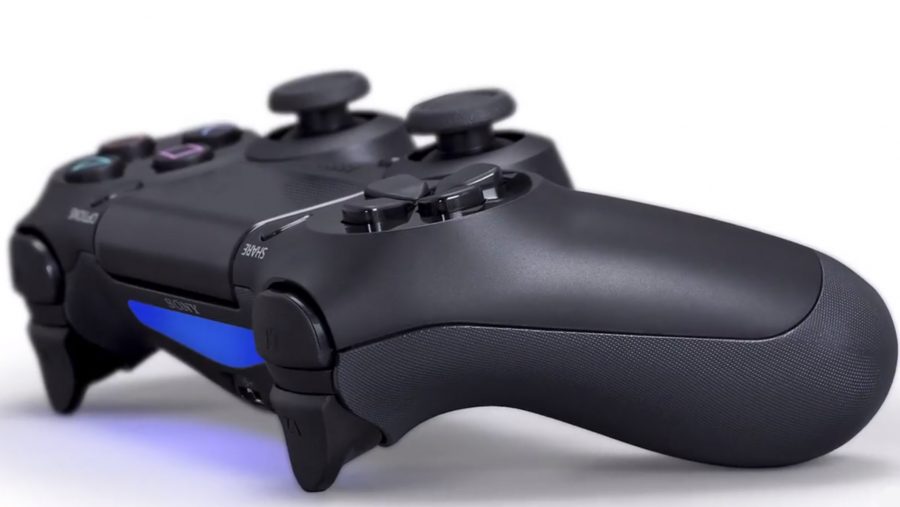 The best thumbstick controller is the Sony Dualshock 4.

PC support for the PlayStation’s DualShock 4 pad is growing. Valve has updated Steam to allow full configuration of the DS4 in the same way you can mess with the Steam controller. That doesn’t, however, mean all Steam games will support it equally.

We still prefer the Xbox pad’s offset layout, and those DS4 trigger buttons are horrible, but the actual analogue sticks themselves are hands down the best around. If only we could get an Xbox pad with the DS4’s sticks. Time to get modding… 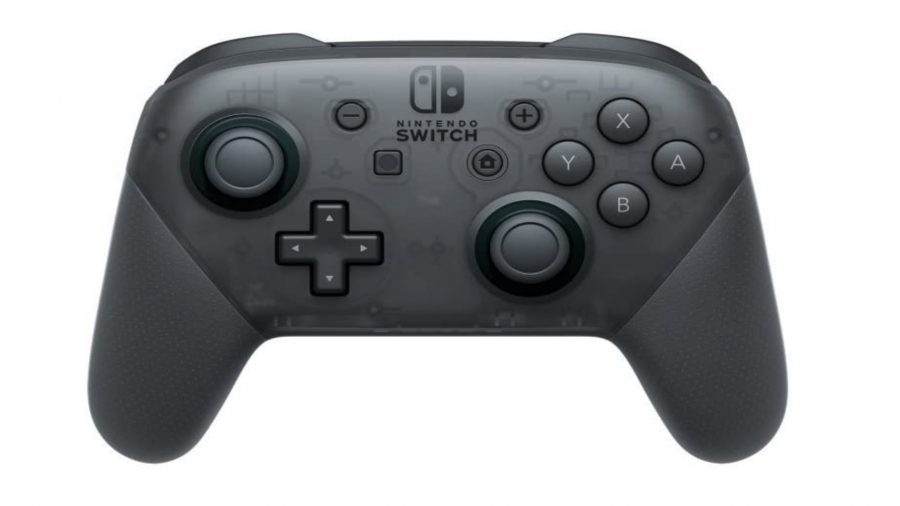 The best alternative PC controller is the Nintendo Switch Pro.

The Nintendo Switch Pro has been made specifically for the diminutive console, but has been given its own Steam profile and can be connected to your gaming PC with either a wireless Bluetooth connection or, if you want to get configured in Steam, via a USB-C cable.

And it’s a quality pad too, feeling solid and reassuringly robust in the hand. The thumbsticks feel good and the buttons satisfying. It’s also got a whopping 40-hour battery life via Bluetooth too. Unfortunately it does suffer for being designed for the Switch because it lacks proper analogue triggers, something that’s important in a growing number of games, and that’s absolutely vital in any arcade racer that isn’t Mario Kart. 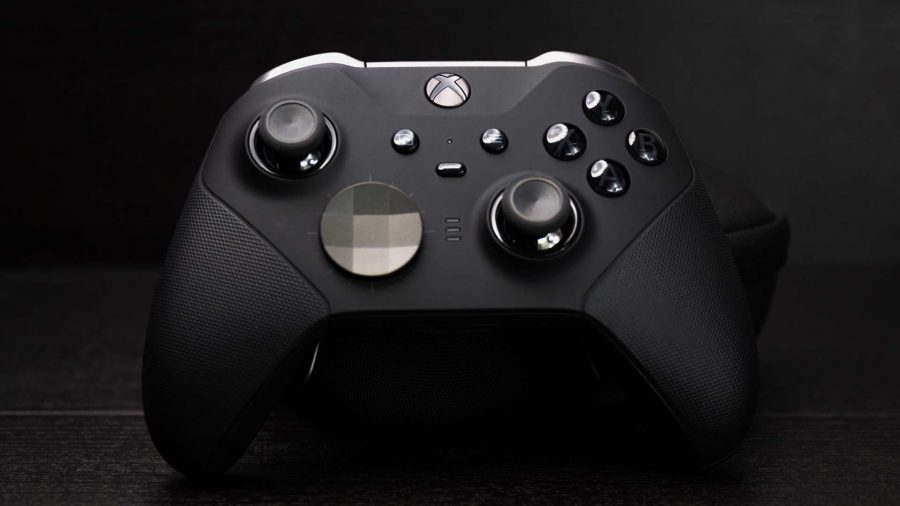 The best high-end controller for PC is the Xbox One Elite Series 2.

I mean, yeah, spending this much on a joypad might seem pretty crazy, but the Elite Series 2 is one seriously beautiful controller. Almost everything about it has been designed to just scream ‘QUALITY!’ in your face. It’s an evolution over the previous version rather than a revolution, but it’s got everything we loved about the original Elite, plus everything the competition has added to their high-end pads to try and compete.

It’s beautifully built, impressively responsive, and ultra-versatile too. But I’m still note sure it’s worth that hefty a price premium over the standard Xbox One controller, which is why the Elite Series 2 isn’t down as our absolute, must-have, best PC gamepad in this test. It’s the pad you might aspire to, especially if you’ve ever had one in your hands, but it’s most definitely a luxury rather than a necessity.

Read the PCGamesN Microsoft Xbox One Elite Series 2 review for our full verdict and score. 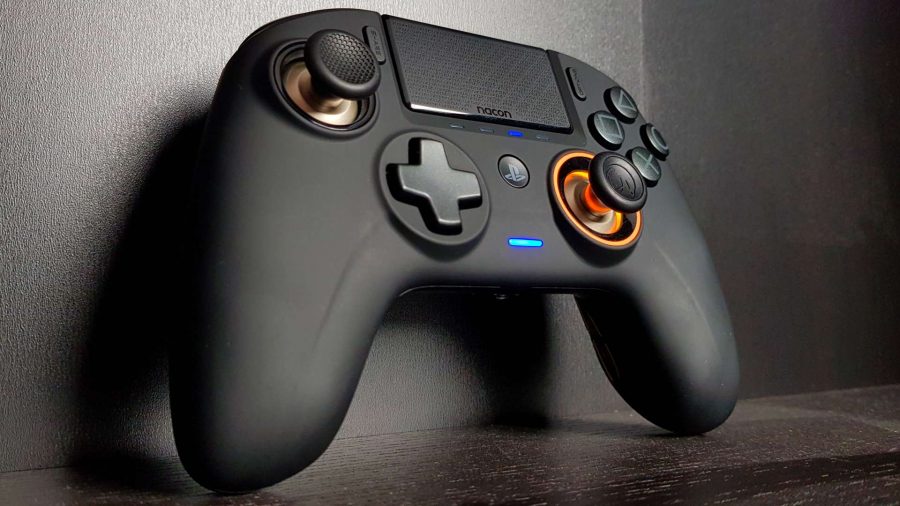 The best hybrid PC controller is the Nacon Revolution Unlimited.

Many companies have tried to match the quality of Microsoft’s Xbox One Elite controller, but very few have managed to nail its mix of serious build quality and ultra customisation. But Nacon’s pad succeeds in both and also manages to mix both the excellent PlayStation thumbsticks and touchpad with the Xbox asymmetrical layout.

The only issue is the software. It refuses to connect unless you’re wired in and some of its wordless iconry is borderline impenetrable. But there are a whole host of customisation options buried in there if you really want to go deep.

Read the PCGamesN Nacon Revolution Unlimited review for our full verdict and score. 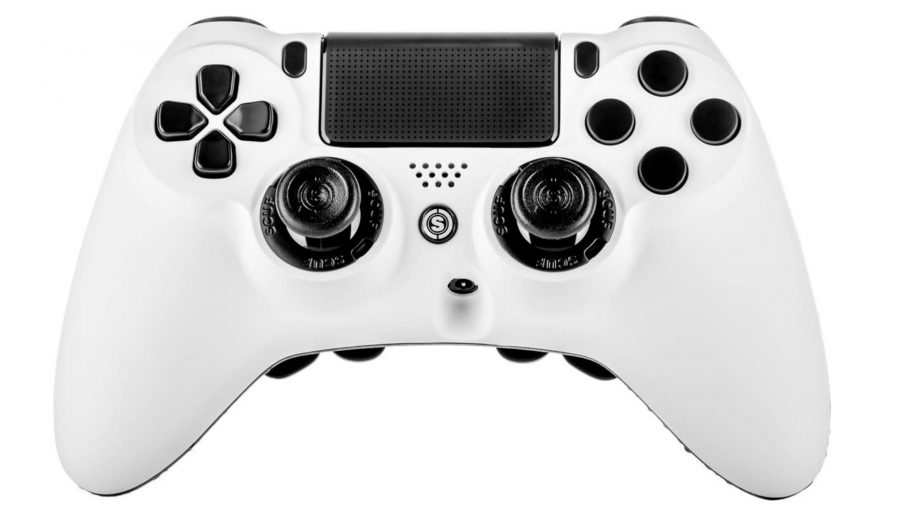 The best paddle controller for PC is the Scuf Gaming Impact.

Scuf Gaming does a whole host of serious gaming controllers, in both Xbox One and Playstation 4 trim. That means it will connect either via the Microsoft wireless dongle or Bluetooth. But you do also get a whole bunch of paddle switches on both the Impact and the Infinity 1 controllers. They’re solid, and require quite a bit of force to actuate, but that means you won’t end up hitting them by accident.

But they’re also the most expensive pads we’ve checked out so far. The fancy colours and the paddles switches are the only things which mark these controllers out from the competition. But if you want to peacock with your pad, then Scuf has you covered.

Best of Xbox and PlayStation 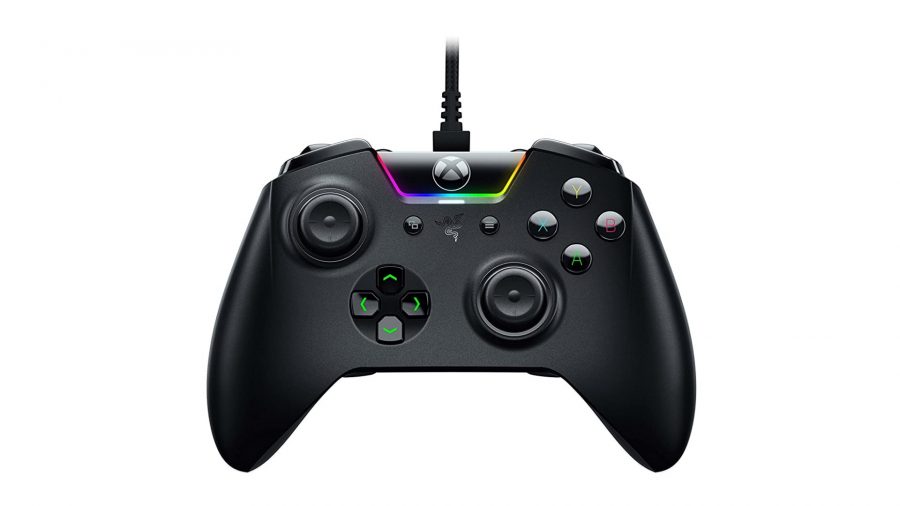 The Cult of Razer has obviously taken one look at the Xbox One Elite controller and said ‘We can do better than that’.

It can’t. It’s added in some extra microswitch buttons to the Wolverine, some adjustable hair-triggers, dropped in a pair of pseudo paddle switches on the underside of the pad and kept it otherwise very clean. It’s a fantastic pad, but can’t quite hold a candle to the Elite. If you’re looking for RGB, though, the Wolverine is where it’s at.

The best cheap PC controller is the EasySMX Wireless.

The EasySMX Wireless is proof positive you don’t have to spend a fortune to get a well-built PC gaming controller. Sure, it’s losing some of the finesse of the other, more expensive pads, and is more aping the original Xbox 360 controller than the modern Xbox One version, but it’s got a decent battery life and the wireless connection is solid.

It’s also an absolute bargain, even if the triggers maybe don’t feel quite as accomplished as you might want them to be. But it’s still a solid, reliable controller that doesn’t cost the earth, and you can’t really ask a lot more than that. A genuinely great budget controller for PC. 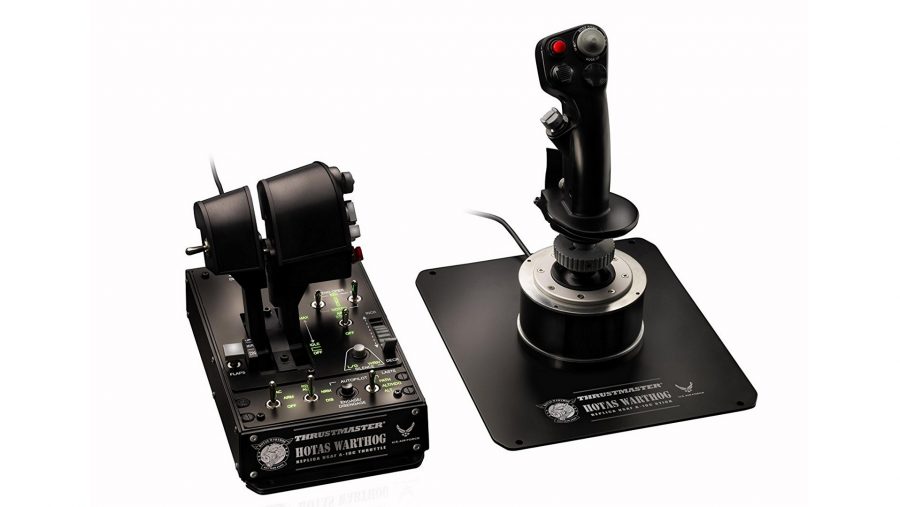 The best flight stick is the Thrustmaster Warthog.

Thrustmaster’s Warthog flightstick is a replica of the controllers in the classic A-10 Tankbuster, seemingly hewn from the same military-grade materials, and probably only slightly cheaper than a second-hand plane. Yes, the Warthog is frighteningly expensive, but if you’re already looking to pick up one of the best PC flight sticks then you’ve probably got pretty niche tastes – and this is the best way to satisfy them.

The Warthog has been around for a while now, but we’ve still seen no other flightstick come close to the feeling we get when using it. It’s a lot of money, but still manages to feel worth it when you’re hurtling through an asteroid belt, flipping on a pirate, and reducing their ship to tiny bits of melty scrap. That said, we’re still keen to see what Logitech does with the Saitek brand in the future and whether it will offer some serious competition to the Warthog. 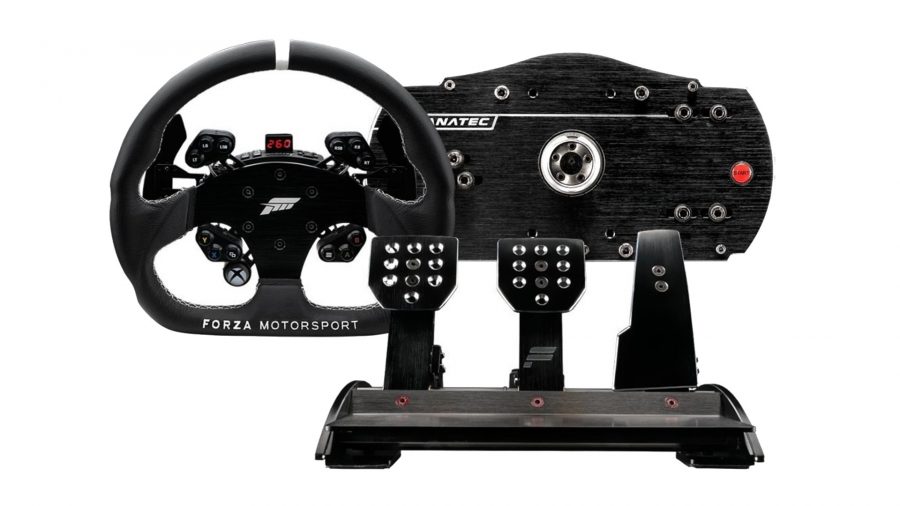 The best PC steering wheel is the Fanatec Clubsport.

Sooo, yeah… the Fanatec Clubsport setup is the price of a powerful gaming PC, but it’s also the stuff of gaming peripheral dreams – and it’s all down to just how beautifully designed, created, and finished the Clubsport kit is. If you don’t go for one of the preconfigured bundles you’ll have to create your own, picking and choosing from a very long list of goodies.

The main wheel base is the same across the board, but then you can fit different steering wheels, gearshifts, and pedals to the mix. And they’re all built out of solid lumps of metal and precision-engineered components. The Fanatec system has hands-down the best force feedback system we’ve ever used, even down to feedback from the pedals, too.

Here’s our handy video guide on all the differences between the best PC controllers.

Microsoft’s Elite Controller is the very pinnacle of PC controller goodness. But, if you aren’t willing to spend a mid-range GPU amount of money on a single controller, the standard Microsoft Xbox One Wireless controller can’t be beaten. With sublime design and well-machined construction raring to go, Microsoft has the top two best PC controllers locked down.

But that doesn’t completely disqualify some of the tough competition. Personal preference can’t be cast aside, and no doubt some of you out there prefer the parallel thumbstick design of the Dualshock 4. We’re also well-aware of a vocal dozen or so gamers who pick the Steam controller as their weapon of choice.

And for the budget-conscious of you on the lookout for the best cheap PC controller, it doesn’t get much better than the EasySMX wireless. While it may not have the flashy lights of the Razer peripherals or the functionality of the Elite, you just can’t beat the solid construction and simple plug-in-and-play functionality that the EasySMX offers up for just a little dosh.