Thanks to advancements in wireless and battery technology, using a wireless gaming mouse no longer has any disadvantages compared to its wired counterparts. Ultra low latency means you won’t notice any lack of responsiveness and battery life can stretch into the hundreds of hours, minimising the amount of time you need to plug it back in.

Wireless mice can even have some advantages over your conventional wired clicker. You don’t get any cable drag, which can help with accuracy in fast-paced shooters like Black Ops – Cold War, and they’re more aesthetically-pleasing too, doing away with wires so you can better manage cables in your gaming setup.

We’ve rounded up our favourite wireless mice for gaming to buy in 2021, ranging from high-end clickers for aspiring pros, to those that won’t break the bank while still offering a great gaming experience. Whether you want a wireless gaming mouse designed for a specific genre, such as strategy games or MOBA games, something more ergonomic, or you’re looking for a great left handed gaming mouse, there’s something here for everyone. No matter which one you choose, all the mice listed here will give a great gaming experience. Oh, and if you’re actually not all that bothered about wires, then you can check out our overall picks for the best gaming mouse. 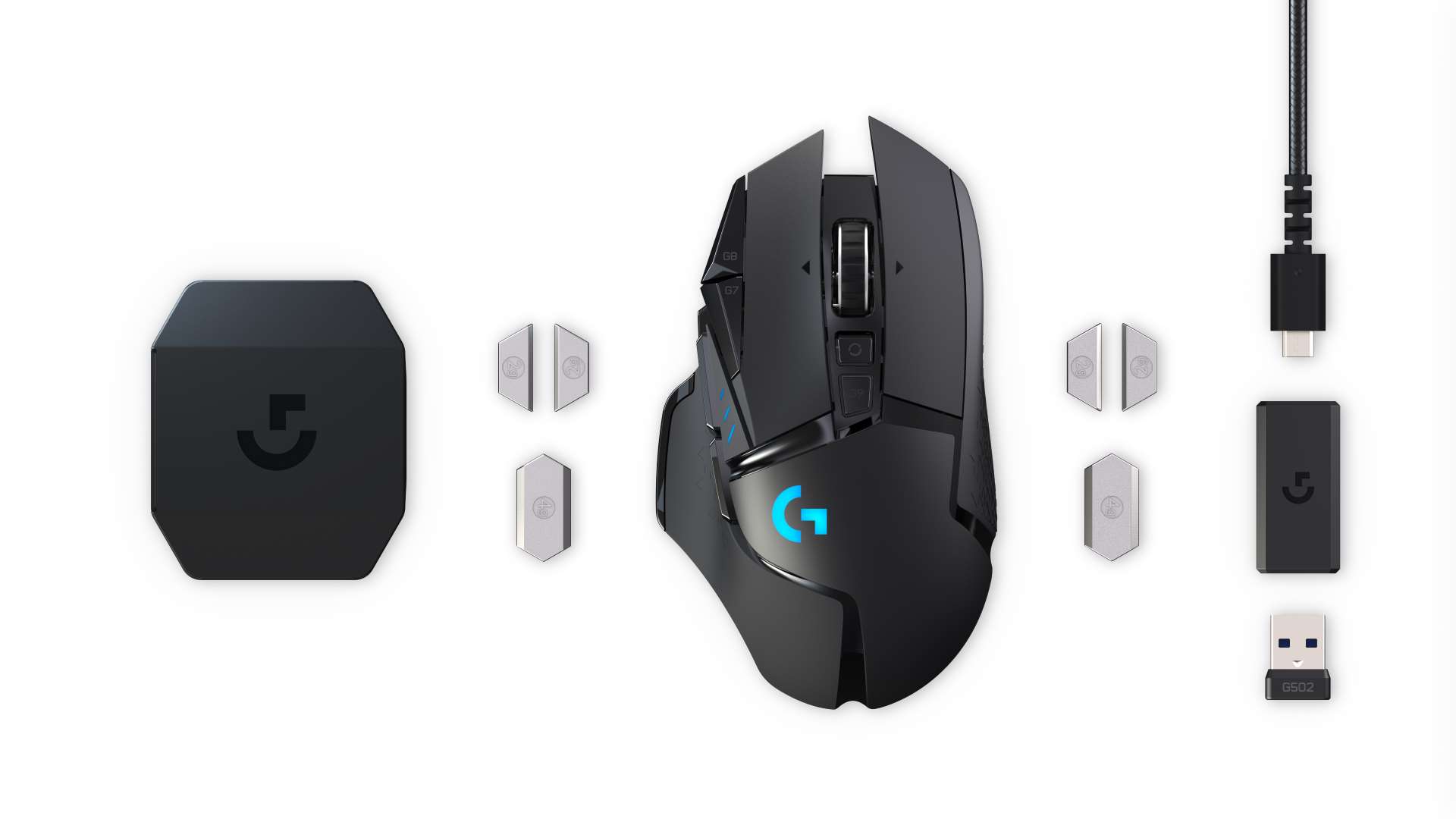 The best wireless gaming mouse is the Logitech G502 Lightspeed.

The trophy for the best wireless gaming mouse has to go to Logitech’s wireless G502. Its in-house HERO 25K optical sensor is one of the best sensors on the market, supporting a 1ms report rate and, as the name suggests, up to 25,600dpi. It’s also got a respectable 60-hour battery life, which can be completely forgotten about when pairing it with Logitech’s Powerplay mouse mat to wirelessly charge the mouse as it sits on the pad.

It’s ergonomically sound too, with a nice shape for right-handed gamers and soft touch rubber grips. There’s an adjustable weight system onboard, letting you increase the stock weight of 114g up to 130g if you prefer something a little more hefty. It ticks the box when it comes to RGB lighting too, and has the same 11 programmable buttons featured on the original wired version. This mouse really does it all, perfect if you play a wide variety of games.

Read the PCGamesN Logitech G502 Lightspeed review for our full verdict and score. 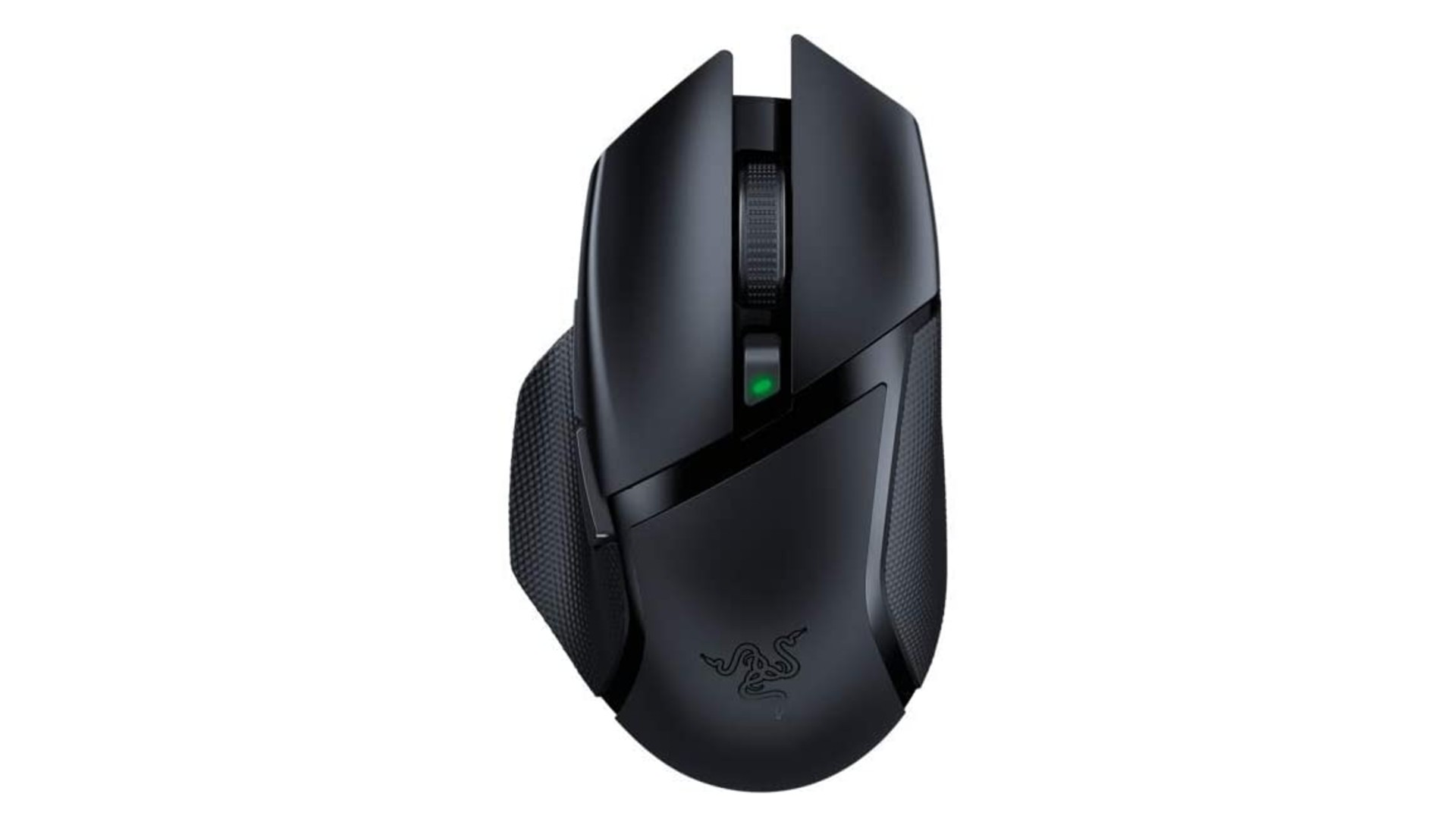 The best wireless gaming mouse with a long battery life is the Razer Basilisk X Hyperspeed.

Want a mouse that you can charge and forget about for a month? Razer’s Basilisk X Hyperspeed has pretty much the best battery life you can find on a gaming mouse, granting 285 hours on low-latency performance mode, or up to 450 hours under standard Bluetooth – although the latter will introduce a lag you’ll want to avoid in competitive games. You’ll have to do without RGB lighting, but that’s a small compromise for a single charge once per month if you use the mouse for nine hours a day.

It’s got Razer’s own 5G optical sensor, with up to 16,000dpi on tap for precise movement in shooters like Fortnite, plus mechanical click switches which are rated to last for up to 50 million clicks. The USB dongle handily slots inside the mouse and it’s pretty light at 83g, making it the perfect travel companion with your best gaming laptop, too. 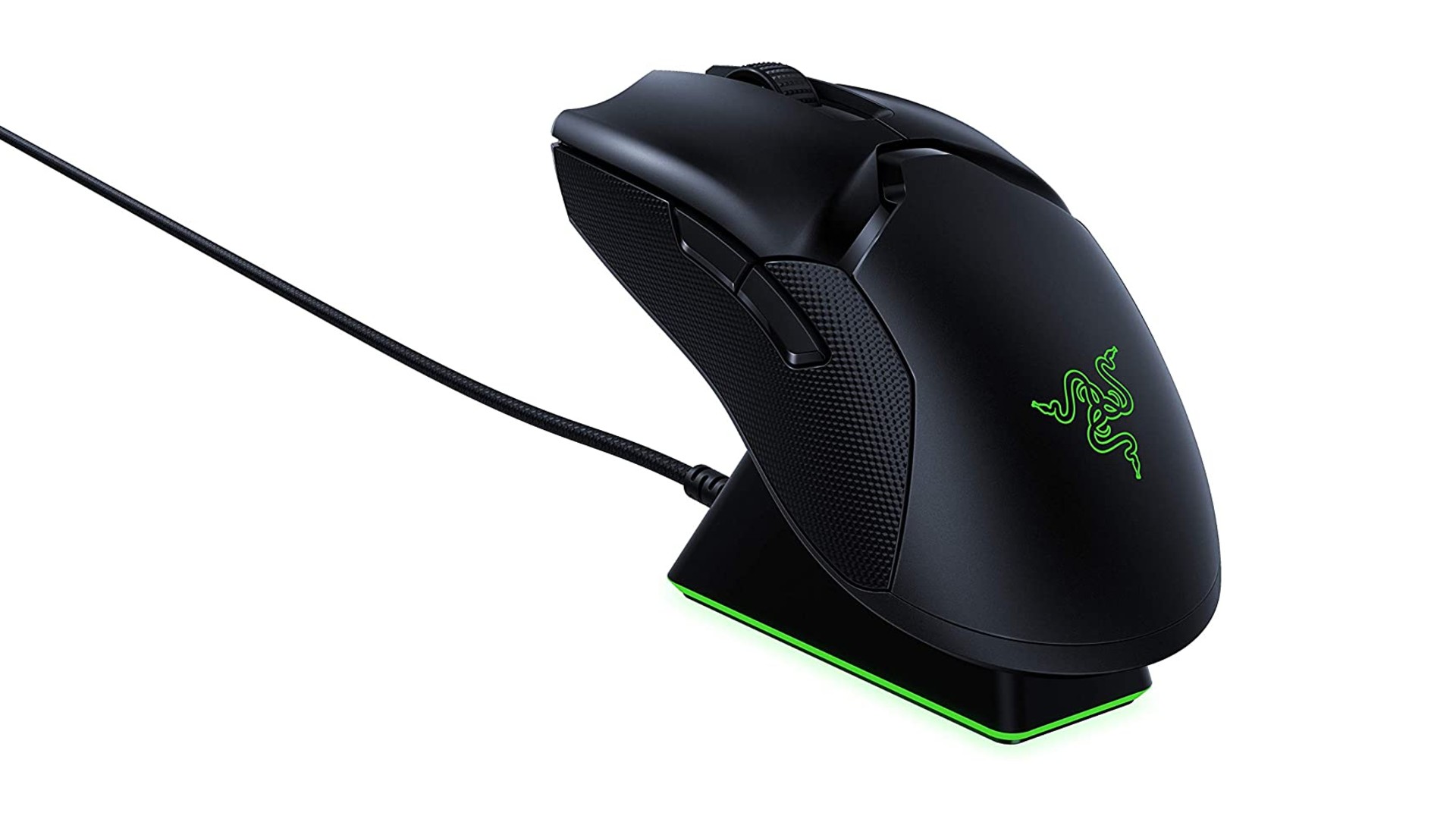 The best wireless FPS mouse is the Razer Viper Ultimate.

If you predominantly play FPS games competitively and you’re looking to go cordless, then Razer’s Viper Ultimate would be our choice. It’s impressively lightweight at 74g, which is particularly low for a wireless gaming mouse, and with Razer’s Focus 20K optical sensor offering 20,000dpi, the mouse is perfect for fast and precise flick shots in CS:GO.

It’s got up to 70 hours of battery life, so you won’t be charging it too often, but when you do, it props up nicely on the included charging dock – no fiddling about trying to plug and unplug cables here. Optical click switches respond quickly, which is essential for competitive gaming, and it’s even got customisable RGB lighting for some extra flair. 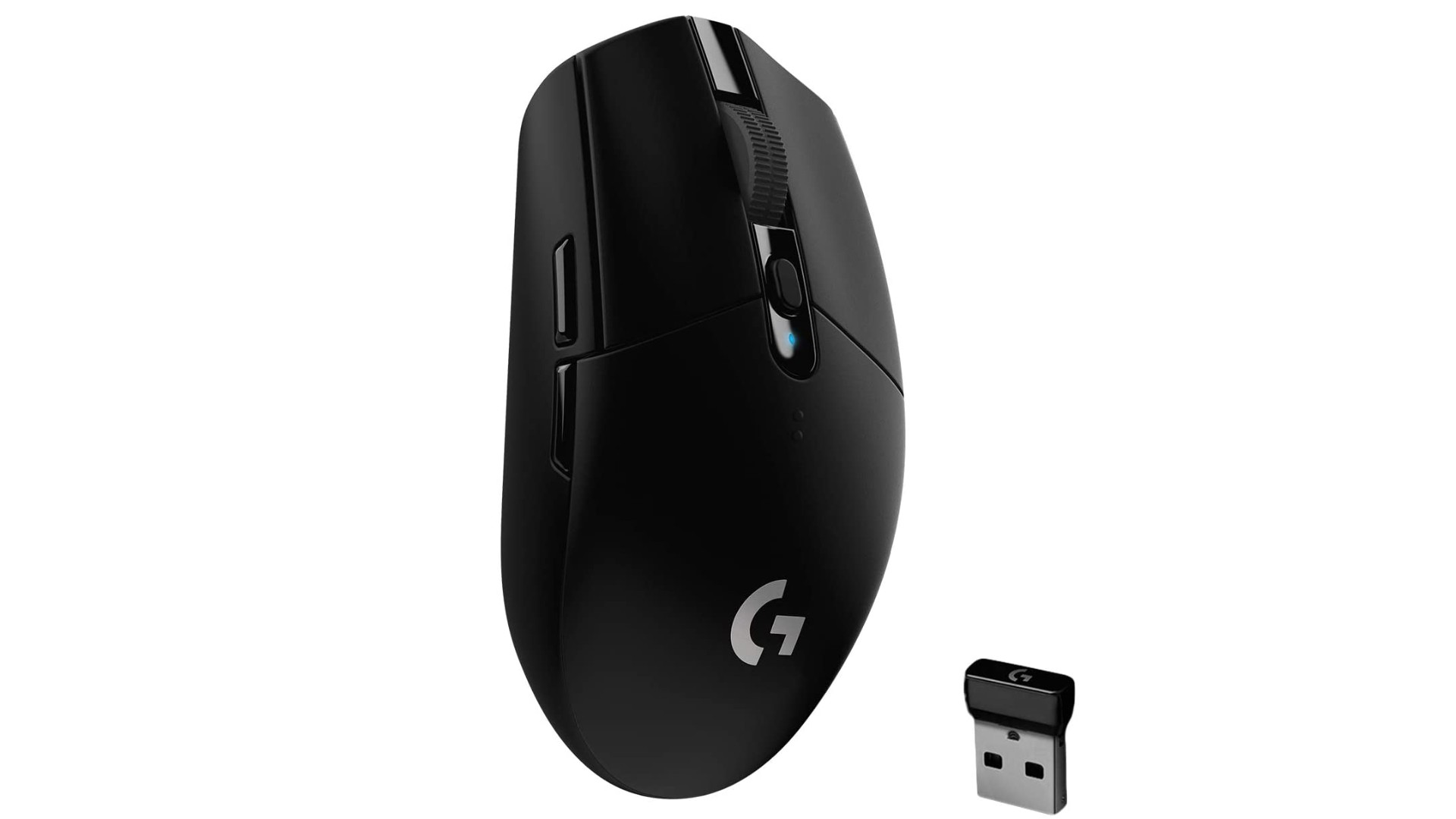 When going for something a little cheaper, you want to avoid mice branded as ‘gaming’ , which often boast no real advantages over any regular mouse. The Logitech G305 keeps the price down, and while it may not be the fanciest looking mouse on this list, it still has some serious gaming chops. Much like the G502 Lightspeed, our current favourite, Logitech’s HERO optical sensor makes an appearance here, too, this time rated at 12,000dpi, which isn’t far behind some of the more expensive mice on this list.

It’s also got some of the best battery performance on this list at 250 hours, so the fact it takes an AA battery instead of a rechargeable pack inside is less of an issue. Still, it keeps the cost down at least, and means you won’t need to worry about battery issues a few years down the line. The included USB dongle uses Logitech’s Lightspeed technology giving a response time of just 1ms. 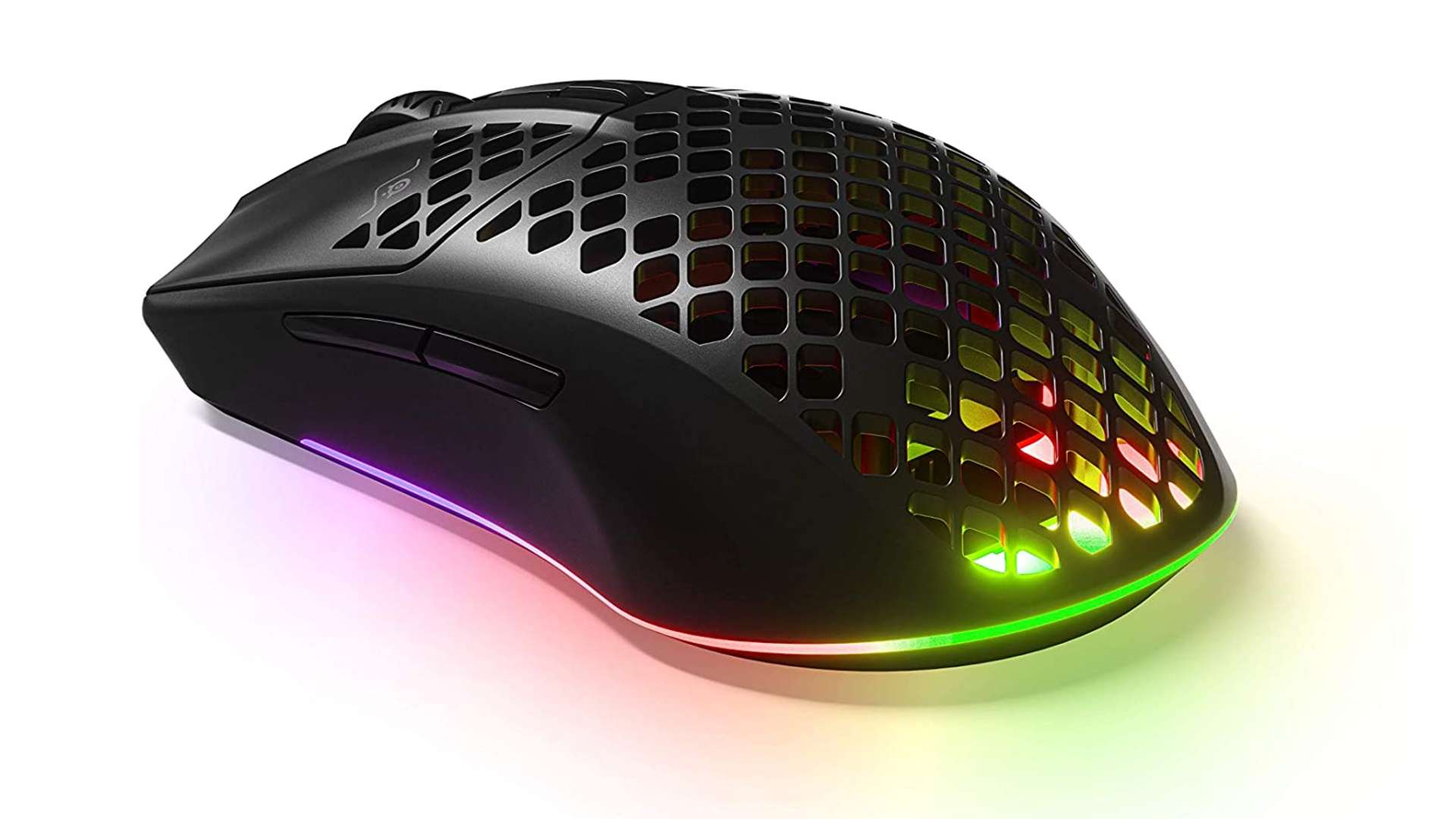 If you’re looking for one of the lightest wireless gaming mice available, the SteelSeries Aerox 3 might be worth considering. It weighs in at just 66g, thanks in large part to the honeycomb design, which is becoming increasingly popular at the moment. It uses SteelSeries own TrueMove Air optical sensor developed alongside Pixart, giving up to 18,000dpi.

It’s got three separately customisable RGB zones, while still managing to pack an impressive 200-hour battery life that fast charges via USB-C. There’s an IP54 rating for water and dust resistance, making it the perfect mouse for the literally butterfingered gamer, too. 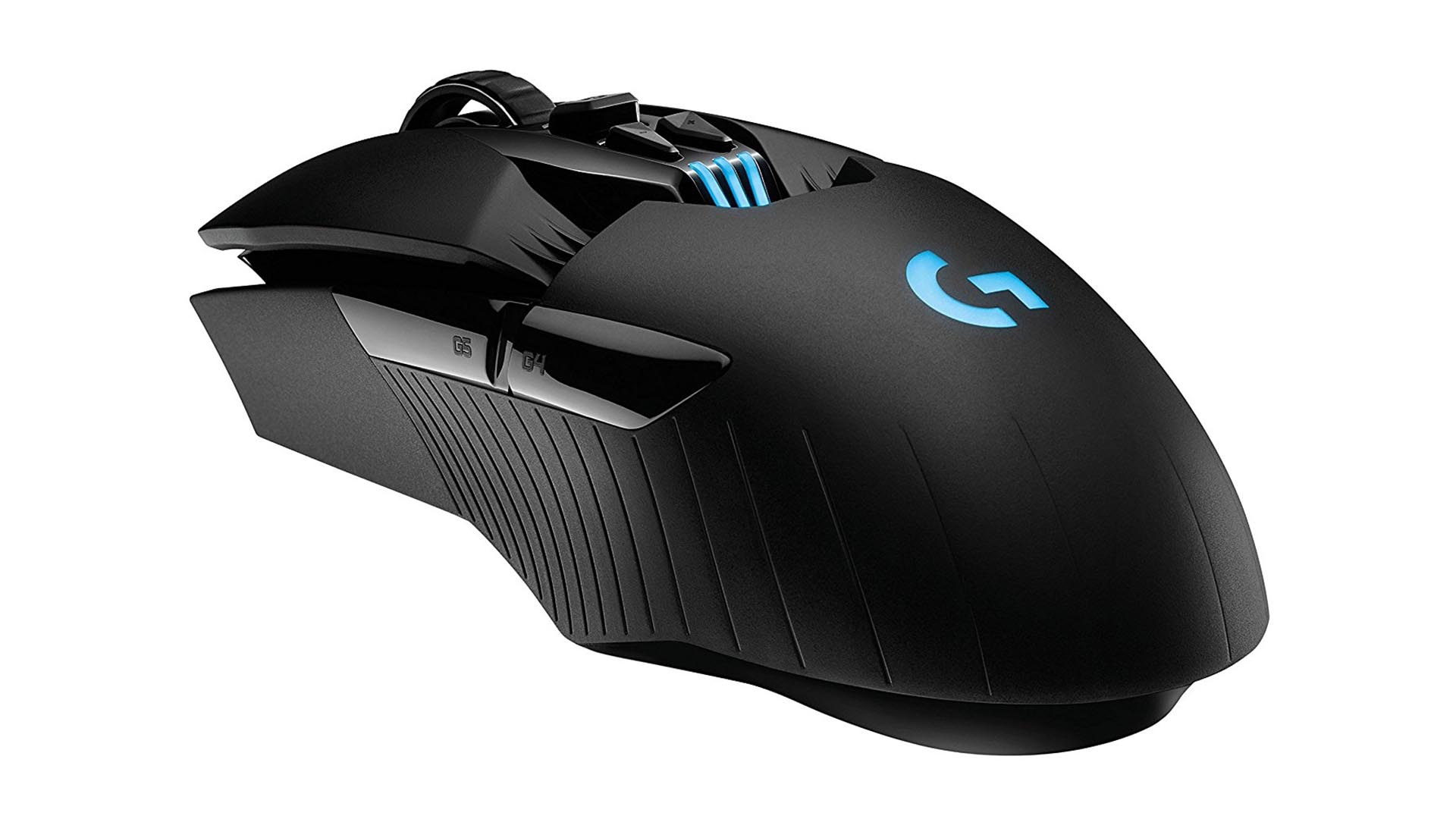 Yes, it’s another Logitech mouse here – credit where credit’s due and all that. If you’re looking for the best ambidextrous wireless gaming mouse, you can’t do much better than the G903. It’s got the same brilliant HERO 25K sensor as the G502, RGB lighting, and adjustable weights, which let you increase how heavy it is from 107g to 117g.

It’s also compatible with Logitech’s wireless charging Powerplay mouse pad, and has a default 140-hour battery life that can go up to 180 hours with the RGB lighting disabled – more than double that of the G502.

Read the PCGamesN Logitech G903 review for our full verdict and score. 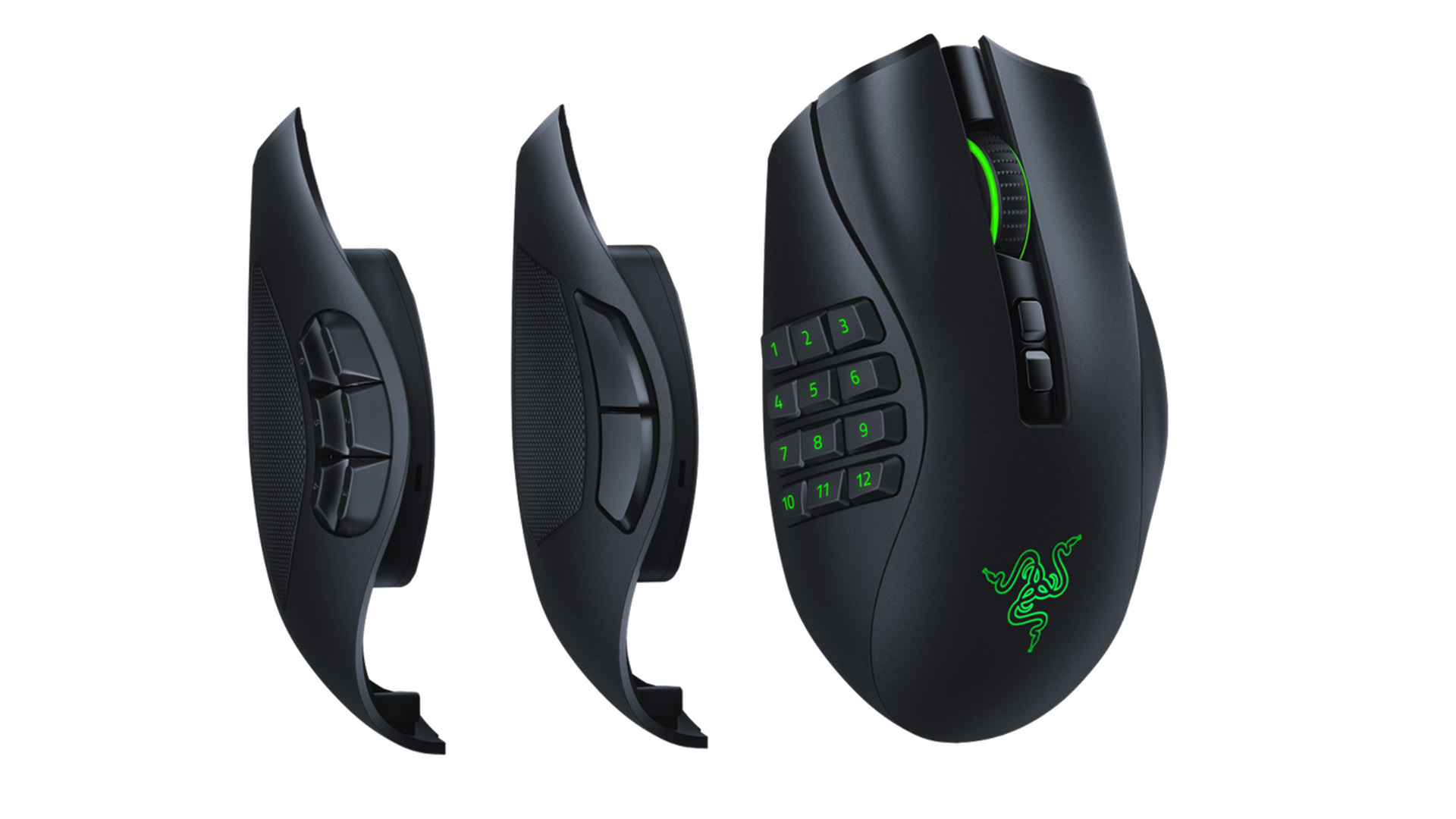 The best wireless MMO mouse is the Razer Naga Pro.

If you’re looking for a cordless mouse for playing the best MMOs, then Razer’s Naga Pro is your perfect wireless companion. It’s modular side-plate makes it versatile for MOBAs and FPS games too, allowing you to switch between two, six, or 12 buttons, resulting in up to 20 programmable buttons in total.

It has the same great Focus 20K optical sensor as the Viper Ultimate offering 20,000dpi, and despite all those extra buttons, still weighs a very sensible 117g. It’s got a pretty decent 150-hour battery life too, so charges will be few and far between, even for the most hardcore gamers. Throw in Razer’s Chroma RGB lighting for an added sense of personalisation, and you’ve got one of the most versatile wireless gaming mice on the market.

When cutting the cord on your gaming mouse, there’s a number of things to watch out for. Specifically for wireless mice, check out the battery life and how it recharges; The longer the battery life the better, obviously, but mice running with conventional AA batteries isn’t necessarily a disadvantage. With recharagable battery packs, you have the risk that after a year or two of use the battery may struggle to meet the original quoted battery life.

What genre you’re playing might influence your decision, too. The Naga Pro is a great MMO mouse but the fact you can switch the side plate out for other game genres and still use Razer’s top optical sensor makes it very versatile across all game types. On the other hand, Razer’s Viper Ultimate is perfect for the hardcore FPS gamer with its light construction and great grip. If you’re looking for a no-frills wireless gaming mouse without breaking the bank, then Logitech’s G305 is a great contender.