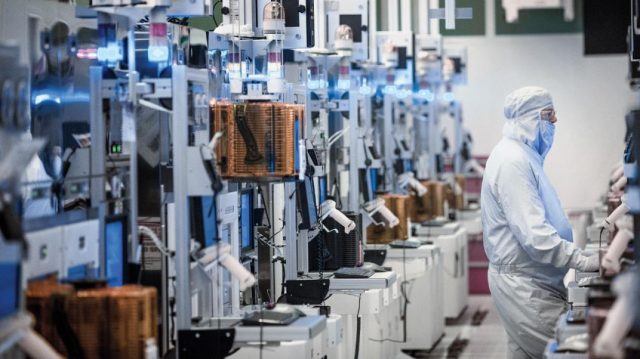 If you date the semiconductor shortage to Nvidia’s Ampere launch last year — and for enthusiasts, at least, I think that’s when the hammer really dropped — we’ve now been stuck in a semiconductor shortage for eight months. The pandemic-related shortage came on the heels of an Intel-specific CPU shortage in 2018 and into 2019, and several GPU shortages have stretched back to 2016. Why haven’t we fixed this problem already?

The answer to that question is anchored in the long lead times and high costs semiconductor manufacturers face, as well as the long-term consequences of some bad business predictions from 10-15 years ago. First, no part of the semiconductor manufacturing process is fast, and many steps require cleanroom facilities capable of maintaining far lower particle counts than even a surgical theater. The factories that build microprocessors are typically referred to as semiconductor foundries. They cost between $10-$20 billion and can take 3-5 years to build.

The GPU shortages prior to 2020 were caused by initially limited yields on 16nm GPUs (2016) and cryptocurrency-related demand (2017-2018). The causes of Intel’s CPU shortages were a little more complex. In the early part of the decade, Intel planned to aggressively increase processor shipments by pivoting to address mobile and building facilities like Fab 42 to meet expected demand. When the company opted to leave the mobile market, it paused the construction of Fab 42. That might have been fine if Intel hadn’t hit trouble transitioning to 10nm, but the company’s problems on that node left it needing to ship CPUs with increasingly large dies on 14nm. At the same time, higher data center demand drove shipments of Intel’s largest Xeon processors.

From 2018-2020, Intel installed new 14nm equipment in existing fabs, moved some business to TSMC, and finished Fab 42, which came online in late 2020. The additional capacity at 14nm and 10nm has helped Intel boost PC shipments and keep its retail products on store shelves. Intel recently warned its shipments might be somewhat constrained in Q2, but overall Intel CPU and system availability has been robust to date.

The Shortages Today Were a Long Time Coming

To understand the capacity constraints hampering production today, we need to step back 20 years to Intel’s introduction of 300mm wafers in 2001. The ability to process larger wafers gave Intel a manufacturing throughput advantage over companies like AMD, whose foundries still processed 200mm wafers. The advantage of 300mm wafers was large enough that industry experts in the mid-2000s thought 200mm facilities would eventually be shuttered. This didn’t really happen. While there were a few closures, the number of 200mm facilities has actually grown in recent years. One reason for this is that the need for the older process nodes never went away.

As process geometries have gotten smaller, they’ve become more specialized. The FinFET transistor structure used by Intel, TSMC, GlobalFoundries, and Samsung is best suited to the construction of high-performance microprocessors. This is why GF maintains 22FDX as an alternative to FinFET, one it argues is better suited to certain types of low-power devices. Many analog devices, display drivers, MEMS (MicroElectroMechanical Systems), power management ICs, and RF chips all continue to be built on older nodes to this day, often in foundries running fully depreciated tools in a low-margin, high-profit business.

Companies have sometimes stopped pushing the leading edge because the cost of new chip designs kept rising every cycle while the improvements a new node could offer have gotten smaller, even for chips that are suited to FinFET transistors. For chips that weren’t, there’s been no reason to move at all — and correspondingly strong, ongoing demand for 200mm manufacturing.

In the mid-2010s, the new 200mm facilities that opened recycled older 200mm equipment that had been uninstalled and sold by a different foundry. This wasn’t sufficient to meet the existing demand, but it took the semiconductor tool manufacturing companies some time to accept there was a real market for new 200mm tools. Growth in 5G, automotive, and IoT shipments has helped keep pressure on the foundry market in ways industry experts didn’t foresee in 2005 or 2010, and that means there wasn’t much slack in the 200mm or legacy 300mm markets to start with. Then the pandemic hit, and auto manufacturers cut their orders. TSMC allocated that capacity away to other companies. The auto industry, which apparently failed to understand it takes several months to make a microprocessor, didn’t give the foundry sufficient lead time to scale manufacturing back up.

Most of the companies we talk about at ET build on the leading edge. Intel, Samsung, and TSMC dominate chip revenue. Owning foundries can be quite lucrative if you have the scale to do it. Image by Bloomberg.

Robust demand has convinced tool manufacturers to begin building 200mm hardware again, and new foundries already under construction will come online by 2023, but that’s going to be a few years late to alleviate our shortage. Total 200mm wafer production is expected to grow by 221,000 wafers per month in 2021, so foundries are actively installing equipment and bringing new manufacturing capacity online.

The semiconductor market is experiencing shortages today partly because the 200mm market was running hot before the pandemic even started. The 300mm shortages on leading-edge nodes like 5nm and 7nm are being driven by strong demand for phones, game consoles, CPUs, GPUs, and other high-performance silicon. There have also been reports of low yields with regard to Nvidia and Samsung, but there’s also evidence of high cryptocurrency demand. Boutique PC vendors have had better luck getting GPUs at reasonable prices, but the retail market has been starved for parts. This trend could have long-term negative consequences for PC gaming as a hobby, especially in the DIY/enthusiast market.

The PS5 and Xbox Series S|X deserve special mention. Both Microsoft and Sony are said to be roughly holding steady with their sales performance from the last generation, with the PlayStation 5 slightly outperforming the PS4. It is not clear if Sony and Microsoft each independently chose to only match their previous generation rollouts or if TSMC constricted them to the capacity they’d tapped for the Xbox One / PlayStation 4. Low-level component shortages could also still be holding back production of either or both platforms.

Hoarding Causes Its Own Problems

We’re also undoubtedly seeing the impact of silicon hoarding rippling through the market as well. Imagine you build a $50,000 vehicle that you can’t sell because you don’t have enough $5 chips, such as what recently happened to Ford. TSMC indicated some months ago that it would try to increase its shipments to automotive customers, but that it would be prioritizing away from other customers to do so. Both of these situations put enormous pressure on companies to 1). Buy as many chips as possible during the limited window when chips are available and/or 2). Switch to alternate sources.

The problem with alternate sources in semiconductor manufacturing is that it can take 6-12 months to move a design from Samsung to TSMC (or vice-versa) and weeks or months to qualify a chip made by a different vendor. Second-sourcing is only a viable option for some companies, some of the time. Since most foundries are under tremendous pressure to ship everything they can make, most alternate sources are themselves stretched. The companies that have the capacity to spare are the ones building specialty, niche products that aren’t seeing much in the way of a demand increase. That capacity can’t be retooled for other purposes in a reasonable span of time.

Hoarding makes shortages worse in the short to medium term. Companies and customers have to regain confidence that parts will be available on-demand and that takes time. In the specific case of the semiconductor market, it could cause foundries to overestimate the future need for microchips, leading to a capacity glut. Foundries are enormously expensive to build and cost a great deal of money to keep up and running. Facilities have to be kept up 24/7 and require weeks of careful inspection before they can be brought back online following a power outage.

Intel would much rather idle the construction of a plant for several years than finish it and have to pay full operational upkeep on a facility that isn’t needed. This typically makes foundries cautious about announcing future expansion plans, which is why the rounds of one-upmanship from TSMC, Intel, and Samsung regarding R&D spending over the next decade have been so unusual.

Finally,  low-level component shortages are preventing companies from manufacturing primary goods. Shortages of resins like ABF (Ajinomoto Build-up Film) can themselves slow production. The entire industry is stuck in a “For Want of a Nail” situation, and it extends down the supply chain to whatever level of fidelity you care to examine.

Adding It All Up

We can’t build chips more quickly because every single part of the silicon manufacturing process is an exercise in patience. We’re in the position we’re in because demand for certain types of silicon grew in ways the industry didn’t foresee 10 years ago. There is no immediate solution to this problem because of how long it takes to bring new foundries online.

What we’re seeing here is not “just” the pandemic. It’s the pandemic, cryptocurrency demand, increased adoption of AI in many markets, and the growth of 5G base stations and smart home shipments. A car today contains far more chips than it did 20 years ago, which increases the amount of silicon required per vehicle.

This semiconductor shortage is unlikely to dramatically resolve on any single day. It will gradually get less bad over time as product shipments and consumer demand align more closely. Nvidia’s second-generation Ethereum miners may help reduce demand for GeForce cards, for example. A future PlayStation 5 built on 6nm might help Sony increase availability. Foundries do increase shipments over 6-12 month time periods and yields on parts also tend to improve, so we should see continued production increases over the course of 2021 from these sources as well.